Our students went down to Mt Ruapehu to compete in the North Island Ski Champs.

With 98 team entries we had outstanding results.

Our ski team of 9 practised every Sunday for 12 weeks at Snowplanet. Sadly the ski racing competition was cancelled after 3 days of snow, snow, snow and bad weather.

However, the team had great fun. When it stopped snowing, snowmen building competitions were held and it is said that Remuera Intermediate School had the upper hand in the snow ball fights on the mountain! 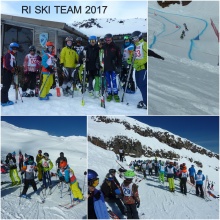 The two RI Ski teams – the RI Racers and the RI Rockets – enjoyed glorious weather for the North Island Intermediate Ski Champs held between August 20-23.  Both RI teams did very well in a competition featuring 75 teams.