On the 11th of August the RI school cross country took place. Runners started with a lap of the field and continued to follow a 3km loop of the school and surrounding streets. There were 4 categories: Year 7 Girls, Year 7 Boys, Year 8 Girls and Year 8 Boys.

Every runner earnt the right to race and represent their syndicate as only 20 runners per syndicate were chosen.

It was an amazing display of athleticism and spectators enjoyed supporting the runners at the multiple viewing spots. Every race was very close.

A huge congratulations to the winners of each race:

On Wednesday 28 August the top eight runners in each category descended upon Waiatarua Reserve to compete against the top runners in the Central Zone competition.

This event was hosted by RI so our teachers, parents and students helped to set up and run the event.

The students in the Sports Committee were marshalls around the course and they did an excellent job guiding runners.

The day was fine and mild but the course was very wet. Running conditions were soft and very challenging for all, despite it being a flat course.

Wednesday 14 August saw our school cross country races. The top 8 placings for each gender and year level make up the Central Zone Cross Country team running on Wednesday 28 August at Waiatarua Reserve. Placings 9 and 10 will act as reserves.
The results are as follows: 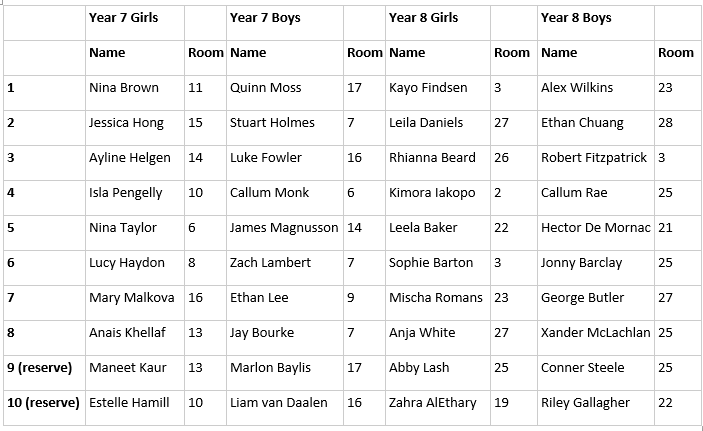 Nicola Hume (Year 7) achieved personal best. She ran the 3km cross country race against 164 Year 7 Girls and placed 89th.  It was the hardest race she'd ever done, very fast and with 2 hurdles and an incredibly steep ascent.

She was excited to run against the best runners in the region and finishing below the median time was a great achievement!

The Year 7 Boys Cross Country had 183 competitors including all the top runners from Auckland Interzones.

We ran our school Cross Country event one wet lunchtime with three laps around the school perimeter. Four teams of 8 students went on to compete at the Central Zone Competition held on Friday 31 August at Waiatarua Reserve.

Unfortunately this year Ellerslie Race Course is completing a major upgrade and is closed until October 2018. Therefore, we are unable to use their grounds for this event.

Due to the teachers strike next Wednesday 15 August, our school's cross country race will now be held at school on Tuesday 21 August during our lunch hour between 12:00 - 12:30pm. The 10 fastest runners from each syndicate will be chosen to participate.

Each runner will run 3 marked circuits within the school grounds. Teachers will be placed at strategic points where there could be ambiguity.